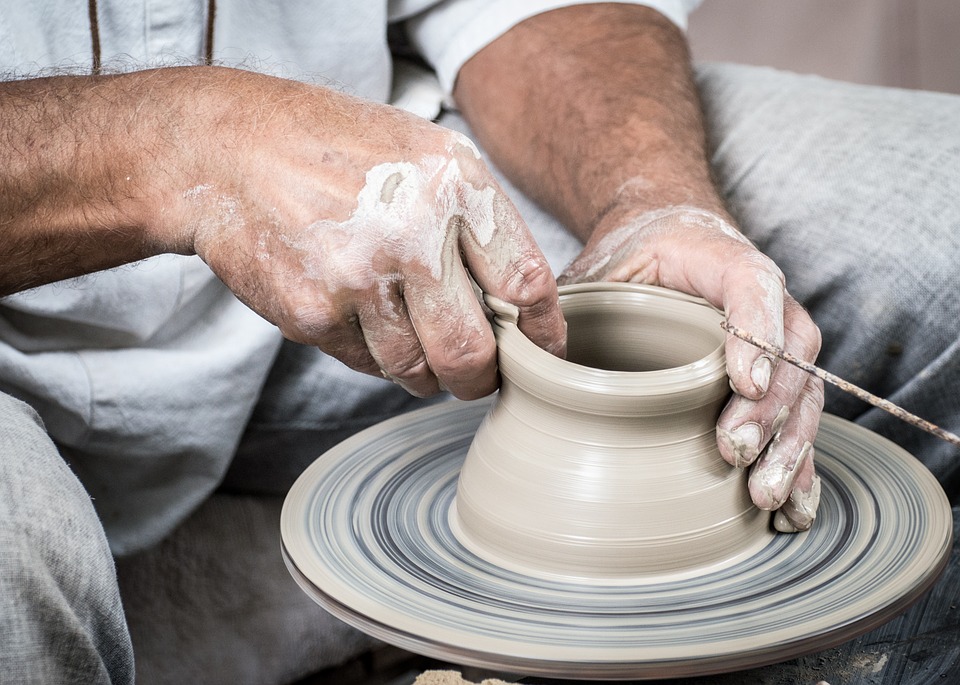 Pottery has been a form of art practiced by humankind for the past 11,000 years. It has a long history and a varied story of aesthetics, technical experiments, discovery, and a variety of clay types, glazes, and firing techniques. It was surely discovered by accident like most genius inventions. Clay was very useful at the time for its waterproofing qualities, it was ideal when making water-carrying vessels. The potter’s wheel was devised in Western Asia around 3500 B.C., which very much facilitated pottery making and permitted the creation of many new pot shapes. It is still very much used to this day and has barely changed since the eighteenth century. As it was practiced over the centuries it was perfected using new and different techniques.

Terracotta objects are made from common clay, varying in color from gray to red depending on their composition. The red earth is ferruginous, the white one can contain limestone, silica, kaolin in variable proportions. The fabrication is done by modeling, assembly of the colombin (long roll of earth rolled up on itself), turning, molding. The cooking is between 800 and 900 ° C. The pottery is called “glazed” when the porous paste is waterproofed with a “glaze” (or “enamel”).

Ceramic clay paste is soft, porous, and covered with an impermeable and an opaque coating. There are several earthenware types: lead-based based with lead, tin-based stanniferous earthenware and fine earthenware made with a chosen clay. For the great quality of its whiteness. The decoration of earthenware can be of “big fire” or “small fire“. In the first case, the piece has only undergone one baking; its decoration, painted on raw enamel, could withstand the high temperature necessary for baking the paste and enamel (around 900 ° C). In the second case, the decor was placed on a piece baked after the enamel was laid. Colors mixed with founders can only withstand low-temperature baking (between 650 and 700 ° C).

Ceramic whose paste is vitrified in the mass (therefore impervious), which is characterized by its whiteness like the fine sheen which it’s not always easy to distinguish. Porcelain is generally recognized as translucent. Porcelain was born in China around the 7th-8th century AD; as soon as it was imported into Europe in the Middle Ages, men never cease to imitate this material and begin to manufacture white and translucent ceramics. Hard porcelain (not scratchable on steel) and soft porcelain (without kaolin and scratchable on steel) are the two great families of European porcelain; most often, they are covered with a glaze or transparent enamel that reveals the whiteness of the dough. Today, Sèvres’s production workshops produce four porcelain pasta: the hard paste (which dates back to the 18th century, contains 75% kaolin); soft paste (a variant of the 18th century, which contains very little kaolin and 50% bone ash, the only phosphatic soft paste in France); the new dough (created around 1882, it contains 45% kaolin); the white paste or dough Antoine d’Albis, similar to the hard dough (it is named after the head of the Manufacture de Sèvres, who put it to the point towards the point around 1965).

Ceramic whose paste contains a high proportion of silica and withstands high baking temperatures (from 1200 ° C to 1400 ° C); it is partially vitrified by baking. With sandstone, we leave the first of two large groups that divide families of ceramics. Pottery and earthenware are ceramics with porous paste that is necessary to waterproof with a glaze or enamel. Sandstone as porcelain are ceramics whose paste is vitrified in the mass and therefore impermeable. It is therefore for aesthetic purposes, since its appearance towards the 4th century in China, its introduction to the Middle East and its development from the Middle Ages in Europe, that the potters have applied glazes on the sandstone, combining researches of matter and form.