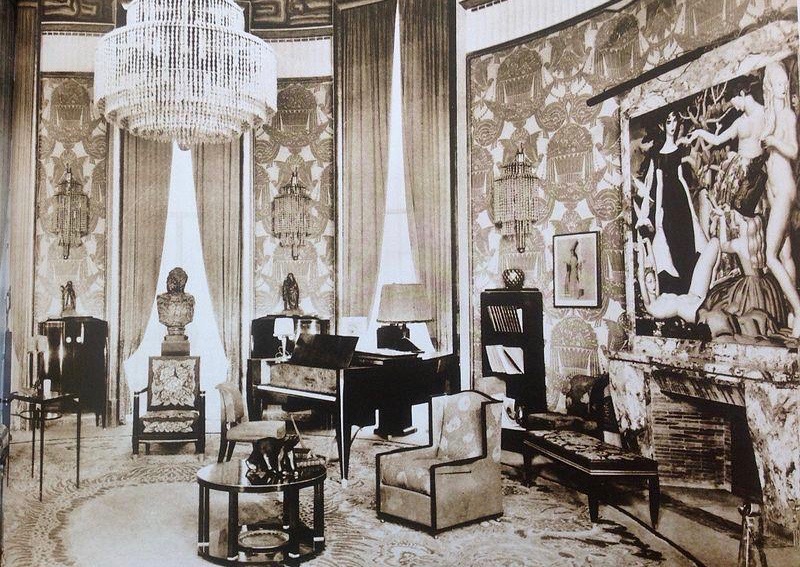 Since the late mid 19th century, architects have decided to start designing furniture and lighting to complete their buildings. Architects became aware that industrially produced materials not only made it possible to create new forms and structures but also to develop a new decorative language. One incredible architect is the renowned Ludwig Mies van der Rohe, he was a director of the Bauhaus, a seminal school in modern architecture. He designed the Barcelona chair. The chair was originally designed for the German Pavilion, the country’s entry for the International Exposition of 1929, which was hosted in Barcelona, Catalonia, Spain. The International Exposition was the second World Fair to be held in Barcelona, the first one being in 1888. It took place from 20 May 1929 to 15 January 1930. The idea of the second fair came to Catalan architect Josep Puig I Cadafalch’s mind in 1905. It was only put in motion by 1917 due to the complications of World War I and other political and economic factors. The fair was an enormous success and held a very large number of countries including Japan, the United States, and the United Kingdom. The term Gesamtkunstwerk or otherwise known as Total Work of Art was much used by the great composer Richard  Wagner (1813 – 1883), in his 1849 essays “Art and Revolution” and “The Artwork of the Future”. There was an increasing trend amongst architects in the 18th and 19th centuries to control every facet of an architectural commission. As well as being responsible for the structure they tried to extend their role to include designing (or at least vetting) every aspect of the interior work as well. This included not only the interior architectural features but was extended to the design of furniture, carpets, wallpaper, fabrics, light fixtures, and door handles.

Art Nouveau was first introduced in between 1890 and 1910 and is a form of architecture and applied art, especially the decorative arts. The British term of Art Nouveau is Modern Style due to its roots in the Arts and Crafts Movement. This movement was created by William Morris (1834-1896). Charles Mackintosh (1868-1928) was a member of “The Glasgow Four” and one of the most influential furniture designers of the Arts & Crafts Movement. In 1900 he participated in the Viennese Secession. This movement was the Austrian response to the international Art Nouveau movement and created by Josef Hoffman (1870-1956). Hoffman was the architect of the Purkersdorf Sanatorium (1904) a nursing home near Vienna, and also designed the Sitzmaschine or Model No.670 as one of the many pieces of furniture and other decorative objects for the interior. The style of Art Nouveau went out of fashion in the 1920s and gave its way to Art Deco style, and revealed its popularity in the 1960s. Many great schools are the perfect example of harmony between architecture and furniture design being combined, the following are Bauhaus (Germany), La Cambre (Belgium), Rhode Island School Of Design (United States).

Art Deco style arose in the 1930s, first in France, and rapidly spread throughout Europe, Britain, and America in the 20th century. Deco kept the nature motif of its Nouveau predecessor, like shells, flowers, plants; however, it became more geometrical. Curved lines altered into straight, repetitive forms. The style became fashionable in all forms of design and art – architecture, interior design, fashion, photography, decorative art, etc. It was influenced by the bold geometric forms of Cubism; the bright colors of Fauvism and of the Ballets Russes; the updated craftsmanship of the furniture of the eras of Louis Philippe I and Louis XVI; and the exotic styles of China and Japan, India, Persia, ancient Egypt, and Mayan art.

Most of the outstanding Art Deco creators designed individually crafted or limited-edition items. They included the furniture designers Jacques Ruhlmann and Maurice Dufrène; the architect Eliel Saarinen; metalsmith Jean Puiforcat; glass and jewelry designer René Lalique; artist-jewelers Raymond Templier, H.G. Murphy, and Wiwen Nilsson; fashion designer Erté; and the figural sculptor Chiparus. The fashion designer Paul Poiret and the graphic artist Edward McKnight Kauffer represent those whose work directly reached a larger audience. In the 1920s New York was a city with an amazing portrayal of Art Deco. Its Rockefeller Center (especially its interiors supervised by Donald Deskey; built between 1929 and 1940), the Chrysler Building by William Van Alen and the Empire State Building by Shreve, Lamb & Harmon are the most monumental embodiments of Art Deco. During the 1930s the style took over South Beach in Miami, Florida, producing an area known as the Art Deco historic district. After the Second World War Art Deco largely vanished, except in industrial design, where it continued to be used in automobile styling and products such as jukeboxes. In the 1960s, it experienced a modest academic revival, thanks in part to the writings of architectural historians such as Bevis Hillier. In the 1970s efforts were made in the United States and Europe to preserve the best examples of Art Deco architecture, and many buildings were restored and repurposed.

An exposition is being held in Paris, called “Le Mobilier d’Architectes, 1960-2020” between the 29th of May and the 30th of September. This exposition is about discovering the history of how architects fit into the decorative arts, through the design of furniture, objects and architectural lighting. It is the first time that an expo is being created for the topic of architects creating furniture, it has been so little studied. This expo has an ensemble of around nearly 300 pieces, more than 125 architects represented and nearly 90 publishers. Here are a few of many being represented: David Adjaye, Ron Arad, Shigeru Ban, David Chipperfield, Odile Decq, Charles & Ray Eames, Norman Foster, Sou Fujimoto, Franck Gehry, Zaha Hadid, Marc Held, Steven Holl, Toyo Ito, Jakob + MacFarlane, Michele de Lucchi, Angelo Mangiarotti, Jean Nouvel, Verner Panton, Dominique Perrault, Gaetano Pesce, Rudy Ricciotti, Aldo Rossi, Sanaa, Superstudio, Carlo Scarpa, Ettore Sottsass.