Pierre Paulin is one of the greatest representatives of French design. He is known for his modern spirit and the alliance he has created between rigour and organics.
He drew his inspiration and influences from Scandinavian furniture, Japanese style and the work of the Eames couple. The furniture he has created is characterised by real simplicity, functionality and durability. His moulded jersey chairs are benchmarks, as evidenced by the success of the Ruban and Mushroom armchairs and the Amphis sofa.

The Ribbon Chair, is a chair born during the sixties (1966). The work of Pierre Paulin and the company Artifort remains a timeless jewel of design despite its undeniable modernity. With the shape of a folded ribbon, as its name suggests, this chair has a modern look, but is also extremely comfortable, as it follows the shape of the body thanks to its perfect ergonomics. Its clean lines make it, according to many experts, one of the most beautiful chairs in the history of design. The Ribbon Chair comes with a footrest that is shaped like the base of the chair.

The Mushroom chair was a revolution in the world of design when it was created in 1959.
The post-war years were marked by a need for renewal, ideals and optimism. This resulted in a profound change in tastes: the minimalist aesthetic and sober colours of the Bauhaus school were gone! Everyone is thirsty for colour, comfort and very quickly for personalisation…
New materials and processes were developed and democratized until they became accessible for mass production. Fabrics are lighter, more extensible and innovative.

With the Mushroom armchair, Pierre Paulin was inspired by an organic element, which would remain typical of his most famous works throughout his career. A great admirer of the work of his colleagues Streamline Ray and Charles Eames, he wanted to offer a chair with maximum comfort, accessible to the greatest number.
He therefore decided to design a chair without legs, ergonomic, that would fit the body of the user who sat in it.
Like many of the other chairs he would later create, he opted for a “hidden” structure and foam rubber padding (developed by Pirelli a few years earlier). He was inspired by modern bikinis made of jersey, realising their capacity to shape the bodies of users. This material is thin, light, stretchy and avoids the wrinkles that a conventional fabric would cause due to the round shape of the Mushroom chair.

In 1970, Pierre Paulin was commissioned to decorate the private flats of the then President of the Republic: Georges Pompidou. Georges Pompidou and his wife were great fans of Modern Art and followed the world of art and decorative arts with great attention. It was therefore no coincidence that they asked the brilliant Pierre Paulin to design their interior.

Through this commission, President Pompidou wanted to promote French art and make it known internationally, since he regularly received international guests.
To meet this major challenge, Pierre Paulin was inspired by the streamline designers Ray and Charles Eames, whose style he particularly liked.
Through this work, we understand that the 3 designers have the same ambition: to propose warm, high-end works, with soft and welcoming shapes.

With its round shape (which makes it almost a Pop Art piece), Pierre Paulin’s Pumpkin armchair evokes, as its name suggests, a giant pumpkin. An original organic inspiration that suggests a lot of softness.

The foam seat and backrest supported by a sturdy frame offer a soft welcome and firm support. 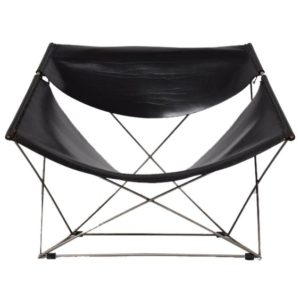 It is almost difficult to recognise Pierre Paulin’s signature as this piece is so different from the designer’s Pop coloured foam armchairs!
Made in the early 1950s, it shows the influence of the Streamline movement on the French designer.
Indeed, let’s not forget that Pierre Paulin was a great fan of Ray and Charles Eames’ creations, but also of George Nelson.
If you look closely, you might even think that the base of Pierre Paulin’s Butterfly chair is a nod to the DKX wire chair.
The F675 has no upholstery or accessories. The structure itself, made of chromed steel, is composed of thin rods that cross each other on either side of the work. This adds to the lightness of the whole: the leather strips almost seem to float in the air.
Moreover, the use of two simple strips of natural leather in sober colours recalls the style of the Streamliners, who used this luxurious material extensively to bring high-end creations to life.
In conclusion, Pierre Paulin’s Butterfly chair is probably one of the designer’s most Streamline chairs.
A true emblematic piece of the decorative arts, it is exhibited at MoMa, and it is easy to see why! 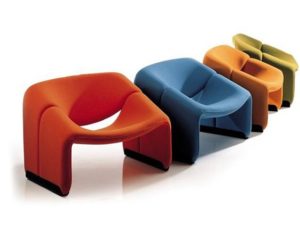 The Groovy armchair by Pierre Paulin is largely inspired by the Butterfly armchair seen above. Designed by the designer a few years earlier (in 1954 to be precise). In the version of the Butterfly armchair, the steel structure is visible, and the crossings of the rods form a geometrical whole. Two strips of leather simply form the seat and backrest.
When he designed the Groovy armchair, Pierre Paulin revised this first approach in order to propose a low armchair with maximum comfort, with a much softer silhouette: the nervousness will be provided by the bright colours of the upholstery.
The structure becomes invisible, and more sober: no more steel braces under the seat. For the Groovy armchair, the artist opts for more classic side frames.
The strips of leather that originally formed the seat and backrest are replaced by polyurethane foam covered with a stretch fabric (Pierre Paulin’s trademark). These two wide strips of fabric are the same colour. Instead of surrounding the armrests with a sewing rod, the strips wrap around the armrests to fall along the legs, and run down their entire length. The bottom of the strips are then ‘pinched’ by a ruler on either side of the chair.
This ensures that the fabric remains flush with the floor.

One thought on “The iconic chairs of Pierre Paulin”