The Serial Eater exhibition examines thirty years of experimentation and reflection on the “food object”. Since its development in the 1990s until its most recent implications, the analysis of food design will enable us to understand the evolutions in consumer habits and how awareness has been raised about the food system.

What type of consumers are we? How should we assess our impact in the current structure? What are we going to accept to see on our plates?

In a sometimes alarmist approach to the future of food, food design questions our behaviour, our wishes and uncertainties as eaters. It also proposes a more light- hearted vision of our relationship to food, whilst not forgetting its primary objective: to nourish our stomachs, eyes and minds. 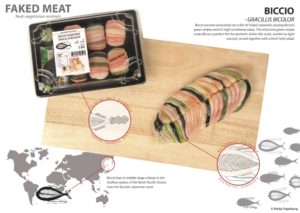 The eater is an evolving species. Since the late 20th century, the profile of the consumer has changed greatly. According to the American essayist Michael Pollan, the last fifty years have radically transformed our way of eating. Feeding ourselves is no longer a vital function, but the affirmation of a life choice, taking a stance and above all, one of the most cutting-edge trends of global culture. At the same time, food design is making its media debut on our plates. It is a recent discipline whose origins lie in art history, industrial design and food. Analysis of its development will enable us to understand the transformations in consumer habits and awareness about the food system. Its evolution is promoted by a series of cultural, culinary and industrial influences, which are going to make the evident limits of food more permeable.

Many artists have used food as the subject of their creations. In the early 20th century, Italian futurists were the first to take an avant- garde, transgressive look at food. In their determination to bring art into all dimensions of daily life, they used food as a sort of poetic, visual language. This definition of food as a creative material was to serve

as the basis for teaching culinary design, which began in 1999, when the Atelier de recherche en design culinaire was created at ESAD in Reims (France). As forerunners of the artistic happening, the futurists organised a series of meals composed of eccentric menus that were totally out of sync with the monotony of conventional dinners. Then in the 1960s, a new generation of visual artists under the guidance

of Daniel Spoerri formed the Eat Art trend and took food as a support for their work. Veritable gastronomic spectacles between visual arts and theatre, these early performances were to influence those that followed, created by food design pioneers such as Marti Guixé, Marc Bretillot and Marije Vogelzang. Through their social dimension, these food happenings call into question the act of eating, gustatory habits and the universality of taste.

In 1973, the food critic duo Henri Gault and Christian Millau radically transformed the bourgeois image of gastronomy by inventing the concept of nouvelle cuisine. This way of preparing food was in phase with the trends of the time: the emancipation of women, nature conservation and the challenging of social hierarchies. It enabled French gastronomy to be desacralised and promoted the subsequent collaboration between certain chefs and the first food designers, such as ‘Yan Pennor’s or Stéphane Bureaux. In spite of the ridicule which it sometimes inspired, nouvelle cuisine paved the way for all the subsequent culinary upheavals, in France and throughout the world. Indeed, a few decades later, molecular cuisine offered itself

a mediatised entry into global gastronomy. An emblematic figure of
the movement, Ferran Adrià proposed an emotional cuisine resulting from the combination of several disciplines: gastronomy, science, design, graphic design and even sign language. Very often disparaged, molecular cuisine has nevertheless enabled chefs to accept to reinvent their practices but also to use new tools and modify their ingredients. Its mediatisation granted a certain legitimacy to the food design research and experimentation.

DESIGN AND THE AGRI-FOOD INDUSTRY

In the early 20th century, the urbanisation and industrialisation of society engendered a new way of producing and distributing food. These industrial methods led to modifications in the appearance of such products as biscuits, chocolates, pasta and all foods that were shaped by means of a “moulded” preparation. With industrial design, foods become marketable products, nutritionally balanced and endowed
with standardised characteristics, such a a handy geometric shape
or a determined colour, all in a recognisable package (e.g. Toblerone, Digestive biscuits, Jelly Babies, etc.). But globalisation and the growing complexity of the food chain highlighted the negative effects of technological and industrial developments. In our contact with food,
the divide has become increasingly wider between the production and consumption systems. Food design has now established itself as a positive contributor in the reconciliation between the eater and the food industry.

THE DEVELOPMENT OF FOOD DESIGN

In the 1990s, a handful of designers reflected and experimented with the food object. Martí Guixé was one of the first people to use the term food design. In 1997, the Catalan designer invented Spamt, a hybrid combination between traditional Catalan tomato bread and industrial food. In France, collaboration between the patisserie chef Pierre Hermé and the designer ‘Yan Pennor’s to create La cerise sur le gâteau marked the first real encounter between the two disciplines. In 1999, the first culinary design research workshop was set up by the designer Marc Bretillot, a materials professor at the Ecole Supérieur d’Art et Design in Reims. Here food was considered like any other material, except that it had a different purpose, that of being eaten. A few years later in 2005, the Agence pour la Promotion de la Création Industrielle legitimised the new discipline by awarding a prize for the dessert Hommage à Jean Prouvé to its designer, Stéphane Bureaux. The first food design work focused on the shape of foods, without overlooking its organoleptic qualities. Food design is based on a cultural approach to food, from its preparation to its consumption, via its presentation. In The Netherlands, Katja Gruitjers and Marije Vogelzang were the first to question their stomachs. Marie prefers the term Eat Design, a concept based on the act of eating rather than on the food object. Towards the end of the 2000s, the concept of food design was consolidated. Various disciplines met up within it and combined, including molecular physics, biology, genetics, anthropology and the sociology of nutrition. Its objectives evolved in line with an awareness of the impact our behaviour was having on the environment. Increasingly conceptual projects emerged and the first reflection on the future of our food took place with such designers as Susana Soares, Chloé Rutzerveld and Carolien Niebling.

Concerns in relation to our health, food security and the origin of our food brought about a real change in our daily diets. However, people have to remain the principal objective of food design. Our behaviour, eating habits, taboos and tastes form the basis of the discipline. In
a sometimes alarmist approach to the future of food, food designers propose their answers to the questions of the 21st century eater. What types of consumers are we? How can we assess our impact in the current system and what are we going to accept to have on our plates?

Vilified by the media, carnivores blame themselves and question the future of their food: vegetarian steaks, insect protein sausages or in vitro meat? The search for healthier food that is more aligned with environmental issues has brought about the profile of an environmentally responsible consumer. But between our food wishes and the assessment of our environmental footprint, the struggle against food waste and the recycling of packaging, it appears that the battle has already been lost. Certain eaters have become even more radicalised, like vegans who refuse to consume any product of animal origin (food, leather, wool, medicines or beauty products tested on animals). More than just a dietary restriction, veganism is a way of life focusing on the defence of animal rights. In this new food order, the love of good food seems to have become a resolutely mortal sin once again. Yet the pleasure of eating and the social dimension of meals are fundamental aspects of our development as serial eaters. Food design can then offer us a more light-hearted vision of our relationship to food, whilst not forgetting its primary objective: nourishing our stomachs, eyes and minds.