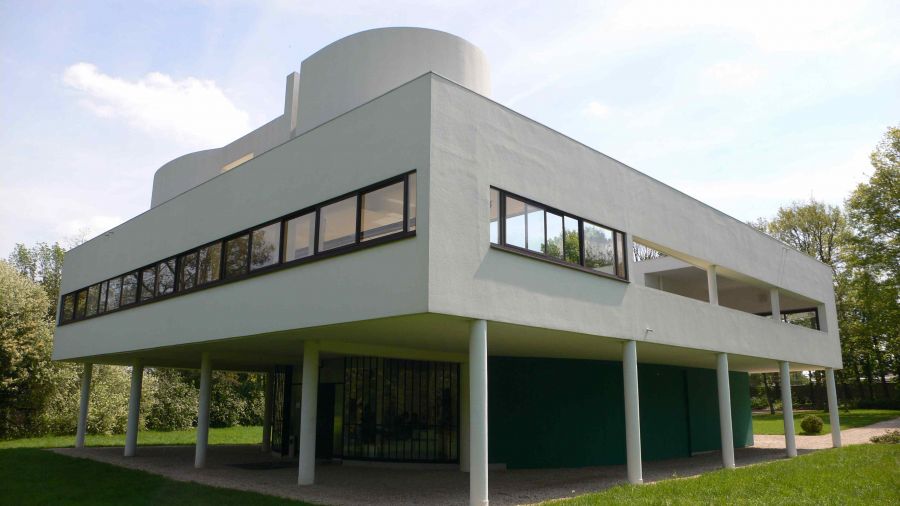 The 20th century was one of the most inspiring and progressive centuries for the discipline of architecture. This period was marked by many technological and modern innovations whose aesthetics inspired architects and designers, revolutionizing the history of architecture.

The Lovell Health House by Neutra

The Lovell Health House is the first detached house with a steel structure. The idea would have come to Neutra during her stay in Chicago. The challenge of the construction was mainly due to the nature of the terrain: a location on a very steep slope in Los Angeles. A concrete hallway crosses the ditch between the street and the entrance to the house. The two-storey glass stairwell, with a Ford automobile headlight serving as a light fixture, descends from street level (the level of the private rooms) – instead of climbing as usual – to the noble floor.
The house is also famous as the location for many Hollywood productions such as L.A. Confidential.

Villa Tugendhat is an architecturally significant building in Brno, Czech Republic. It is one of the pioneering prototypes of modern architecture in Europe, and was designed by the German architects Ludwig Mies van der Rohe and Lilly Reich. Built of reinforced concrete between 1928 and 1930 for Fritz Tugendhat and his wife Greta, the villa soon became an icon of modernism.

Thanks to its steel structure, the villa has a free plan: the spaces are linked to a function, dining room, office, living room, etc., but without being partitioned. The house has only a ground floor on the street (this is the service floor, with the bedrooms), the living rooms are on the lower floor on the garden level. The materials are carefully chosen : the floor is made of travertine, the walls are veneered in precious wood, lemon wood, ebony wood, etc., the wall that protects the study from the direct light of the garden is made of three monoliths of Moroccan onyx. The facade overlooking the garden is entirely glazed.

First creation of the architect Eileen Gray, the Villa E-1027 was delivered in 1929 on the seafront in Roquebrune-Cap-Martin for the publication director of the magazine L’architecture vivante Jean Badovici and lover of the architect. While the project thus takes up the five points of modern architecture as set out by Le Corbusier, it also allows the couple to expose its limits, in particular the design of the interiors, considered too cold to the detriment of the comfort and intimacy of the house, through the manifesto De l’Eclectisme au doute (From Eclecticism to Doubt) which they published in a special issue of the magazine in 1927. It was classified as a historical monument in March 2000 and also obtained the “20th century heritage” label.

The Villa Savoye by Le Corbusier

A symbol of the avant-garde, the Villa Savoye, named “a machine for living in,” by its designer Le Corbusier, illustrates the 5 principles on which he believes modern architecture is based: the pilotis, roof garden, open plan design, horizontal windows and free design of the façade. Originally designed for the Savoye family who planned to spend their weekends here in 1931, the Villa Savoye meets not so much the expectations and needs of its owners as the architect’s plan to make it his ideal villa. Saved from destruction by André Malraux in 1963, it was finally classified as a historical monument in 1965.

Aluminaire House by Kocher and Frey

Erected in ten days, this steel and aluminum house is considered one of the first examples of the young international style. This construction follows in the footsteps of the experimental prefabricated houses, Dom-Ino House by Le Corbusier (1914) or Fuller’s energy-efficient, functional and inexpensive Dymaxion house (designed and developed in the 1940s).

Built in 1924 in Utrech by the Dutch architect Gerrit Rietveld for Mrs. Schröder and her children, the Schröder House is recognized as an architectural manifesto of the De Stijl movement. It is distinguished by the flexibility of its spatial organization and by the asymmetrical composition of the horizontal and vertical planes designed to meet the notion of perfect balance that are so important to Piet Mondrian.

The most important of the houses designed by Alvar Aalto for his friends is Villa Mairea (1938-1939). It was built for Harry and Maire Gullichsen, the director of the company A. Ahlström and his wife, in the Noormarkku ironworks area. The elevations are partly in wood, with teak and Finnish pine, and partly with thin stone slabs and rough-cast rendering. The main entrance has a colonnade of unstripped saplings supporting a free-form roof. A few steps lead up from the entrance hall to the living room, whence a staircase bordered by irregularly composed wooden poles leads up to the upper floor. The ground floor is reserved for entertaining. The spaces naturally invite the visitor to stay, and despite their somewhat public character, have nevertheless an intimate feel. Part of the external wall is movable on a sliding system so that “the house can be completely opened to the garden”.

The Villa Cavrois by Robert Mallet-Stevens

The Villa Cavrois was designed and built in 1932 for Paul Cavrois, a textile industrialist from the North of France, and his family. An emblematic work of the architect Robert Mallet-Stevens, the residence was to respond to a commission guided by “air, light, work, sports, hygiene, comfort and economy”. Imagined as a total work of art, it represents the culmination of the aesthetic and technical reflections carried out by the architect who, at that time, had already delivered the Villa Noailles in Hyères (83). Abandoned, squatted and ransacked in the 1980s, the villa was finally classified as a historical monument in 1990.