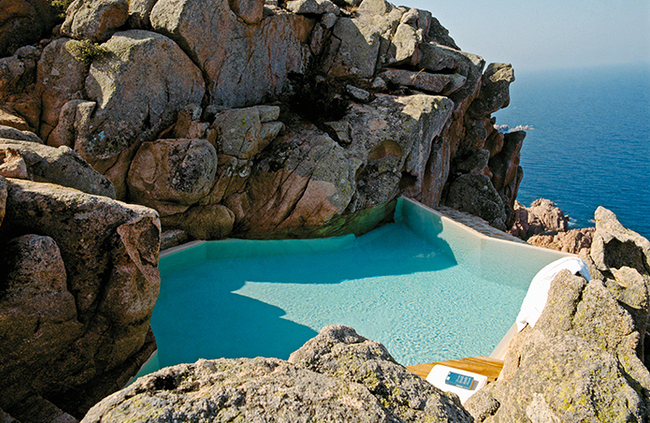 Costa Paradiso, located in northern Sardinia, is the starting point to understand Alberto Ponis’ architecture. It’s the ‘60s when the young architect decided to get involved in designing a villa in Palau, after significant liaisons within the London Modernism. It’s from this turning point that sparked his idea of launching the studio in Sardinia and devoting himself entirely to the holiday villas field.

“I’ve built nearly 200 houses. I’ve thought of every detail, right down to the location of the bathtub in each bathroom. This means that for more than forty years I spent my winters designing houses in which my clients came to spend their summers,” said the architect a few months ago, in the preamble to the exhibition devoted to him at the Institute for the History and Theory of Architecture in Zurich.

But what Alberto Ponis does not seem to realize is the extent to which his work resonates at a time when his discipline is tending to refocus on what is most noble: the context in which it is set, in addition to conferring a crazy timelessness on it, has made it possible to place his work among the most beautiful examples of vernacular architecture in the world.

It started in the early 1960s. A time when, as a young man, Ponis the Genoese had left his native Italy for England and tasted the precepts of modernism in the agencies of Denys Lasdun, then Ernö Goldfinger, just as they were beginning to tend towards brutalism. One day, somewhat by chance, a friend, an interior designer, asked her help in drawing up plans for a villa in Sardinia. Two nights and two days thinking about a project which, once completed, he will discover the implausibilities and other absurd liberties taken by Ponis.

This will not prevent, much later, that he will be recalled to build again on this island perceived as an elsewhere then too poorly served to attract streams of tourists. But for Alberto Ponis, this piece of the north-eastern coast of the island was “the ideal place, at the ideal time” to start a new life, where the red reefs sculpted by the wind plunge into the turquoise blue of the Mediterranean.

It is thus following the frustrations born with this first project imagined too far from the island that Alberto Ponis will undertake the realization of a photographic portrait of this territory, traveling each of its coves, taking each of its roads that still looked like paths, to understand its landscape, its vegetation and its traditional habitats. He is fascinated by what he discovers, by the rhythm that the elements give to nature, by the way they sculpt the curves of these rocks millions of years old, which run down to the only straight line visible here, the one formed by the horizon line.

He was also astonished by the field of possibilities that opened up for his practice, to the point of settling permanently on the island in March 1963. The first clients will call upon others, always more numerous, which will always, according to him, prevent him from intellectualizing his practice, but will weave between each one of his realizations an obvious Ariadne’s thread, that is to say pure, almost organic forms, enveloping ruptures composed of only one level, all sheltered by a roof of tiles, which undulate according to the rhythm of the surrounding rocks, until joining them as if to better blend in, then disappear in the landscape.

A landscape of the Costa Paradiso in which the architect will continue to complete this singular work until the dawn of the year 2000. A work composed of holiday houses, as humble as it is just, perhaps because it is linked to this small territory and its landscape, only; and not to a current of thought.