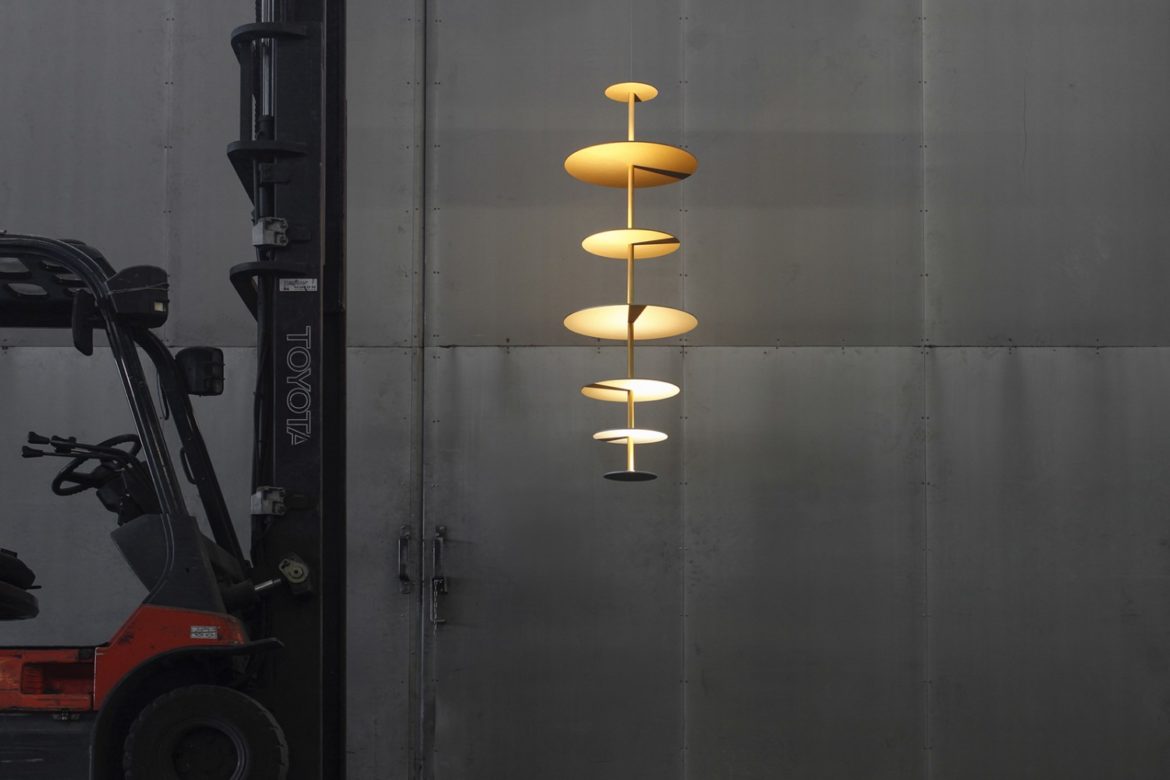 The Sundial Chandelier’s anodised aluminum disks float in space like planets in the universe, while the strong glow of the light makes them look almost spherical. A striking sharp shadow of the central rod is cast in different directions, as if it were illuminated by 6 different suns. They spiral down the piece to end where they started, like a perfect loop in time. The design is all about rhythym, and each version will play a different song, with the shadows dancing to a different beat. The chandelier is developed with and produced by the Belgian company Alton, known for their excellence in aluminum production.Maarten De Ceulaer was born in Belgium in 1983. He studied Interior Design at the Sint-Lukas Hogeschool in Brussels, where he graduated in 2005. Attracted by conceptual and narrative design, he continued his studies at the Design Academy Eindhoven. A strong passion for travelling inspired his graduation project ‘A Pile of Suitcases’, which was immediately picked up by Nina Yashar, founder of the renowned Milanese gallery Nilufar. She commissioned him to create an entire collection, which he continued to develop over the years, and which has been exhibited worldwide. Since then, Maarten regularly catches attention for the highly evocative, poetic and playful touch he gives his objects. He uses his work to tell stories, to stir people’s emotions, to inspire their imagination and to make them wonder. He continuously explores new materials and investigates in production techniques and crafts. The emotional aspect of objects is equally important as the functional, and he has a remarkable attention for detail. He is known for using materials in unconventional ways, and the end result never ceases to surprise us. Maarten De Ceulaer has received prestigious design awards (Belgian Young Designer award 2007, Henry Van De Velde award for Young Talent 2013), and was featured in international design magazines, publications and newspapers. He works with galleries such as Nilufar, Victor Hunt, Industry and Galerie du Passage, and companies such as Fendi, Moroso, Cappellini and Casamania. His work is held in private and public collections (Design Museum Ghent), and has been exhibited in museums (Stedelijk Museum ‘s Hertogenbosch, Design Museum Ghent, Triennale Milan), festivals (Lodz Design Festival, Biennale Saint-Etienne,…)and fairs (Design Miami/Basel, Design Days Dubai, PAD London and Paris, Interieur Kortrijk,…) worldwide.