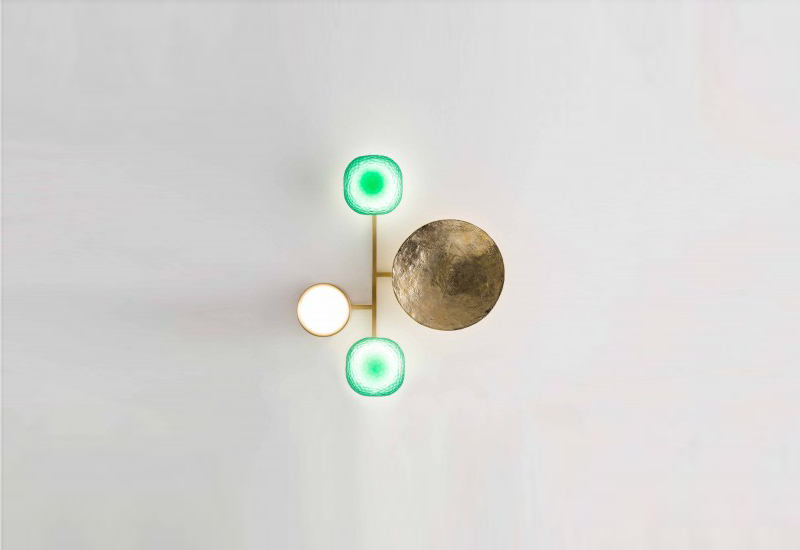 This sculptural piece uses metal and artisan Murano glass to create a multifaceted wall light.Numerous components work in harmony, projecting direct or indirect light about the Gioielli, with each element bearing its own special characteristics.The emerald green light has a battuto finish, where the glass is ground to different depths to create tiny facets in the surface of the material, giving an almost gem-like appearance.The impressive brass disk is cast using the lost-wax technique, where the metal is poured into a mould crafted from wax which is then melted and drained away.

The textured effect on the end piece is achieved through meticulous hand work. The combination of textures, techniques and colours make the Gioielli light a truly unique statement piece.

MILAN DESIGN WEEKSupernatural Daydream by Giopato & CoombesGiopato&Coombes presents an experiment carried out by the two designers, focusing on the theme of light and emotions produced by it. The result of this research, that moves between precious materials and high technology, nature and magic, is a series of installations, unique pieces, that represent unexpected mutations that emerge from the development of the current collection. Four sculptural chandeliers, that seem suspended in an abstract and enigmatic world, dominated by the colour red, where the limit between real and surreal becomes blurred. After having met at University in London, Cristiana Giopato and Christopher Coombes began their creative career.

Cristiana, after returning to Italy, finishes her studies at the Politecnico Di Milano and works for Makio Hasuike. Once graduated, in 2002, she begins collaborating with Patricia Urquiola, for whom she works until 2006, following various projects both in architectural and design fields.

Christopher, after graduating at Brunel University in 2001, transfers to Milan and collaborates with George Sowden and Sebastian Bergne.Since 2006 they have been working together on most projects, in which their design visions collide. They have worked with clients such as Lema, Living Divani, Frag, Fiam Italia, Livit, Industreal, Guzzini and Habitat, Miniforms, Glass Idromassaggio, Varaschin, F.lli Boffi. 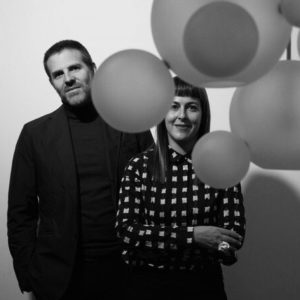