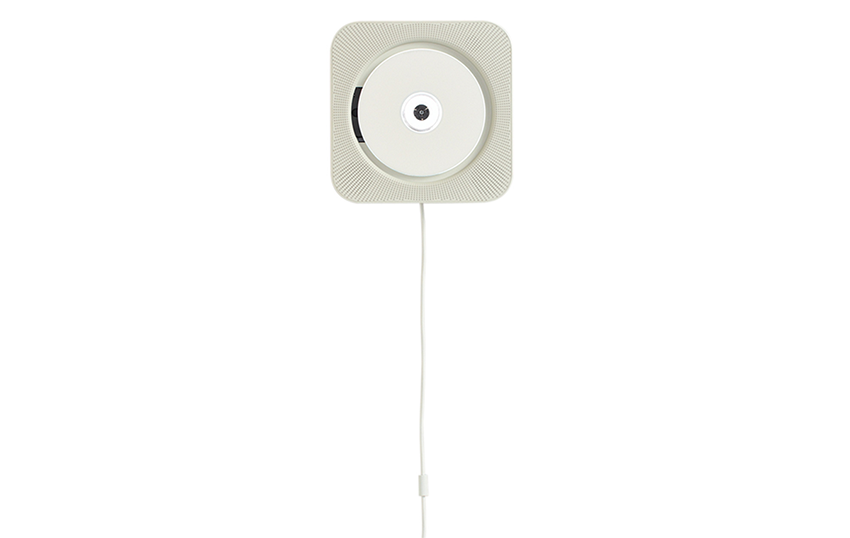 This small wall-mounted CD-player exemplifies Naoto Fukasawa’s approach to product design. Fukasawa wanted to design an object that would trigger an instinctive or unconscious response in its user. He described this instinctive response as ‘Without Thought’, arguing that products should not need an instruction manual, that their functionality should be evident instinctively.Fukusawa noted the resemblance between a CD spinning in a player and the rotating blades of a domestic extractor fan. He explored this visual similarity in the CD player’s design. In particular, he sought to incorporate the intrinsic simplicity of the extractor’s operating controls, a simple pull-cord to switch the unit on and off. The resulting CD-player is a coverless wall-mounted unit that at first glance resembles a kitchen or bathroom extractor, complete with power cord hanging below. The cord invites the user to pull it and play the music on the CD via behaviour learnt from other products found in the home. The speakers are contained within the unit, the volume and search controls are found on top of the player.©MUJINaoto FukasawaDesigning shape is to give form to values that people tacitly share and wish for. Naoto Fukasawa visually captures these values and he draws the exact outline of them. His ability for visualising such unseen outlines for things is not easily worded and described, nonetheless, people are convinced with his ability when they experience his design.Fukasawa’s notions and expressions to approach essential values of things through design travel beyond borders or domains and his thoughts are well respected internationally. His concept for finding hints in subconscious behaviour of people which he named “Without Thought”, is most known and he runs “Without Thought” workshops to share his thoughts.Fukasawa collaborates with world leading companies and brands in such countries as Italy, France, Germany, Switzerland, Spain, Scandinavian countries and Asian countries while consulting Japanese leading companies locally. His area of work is broad and he works with various fields in design beyond categories.Consulting works for Japanese companies are mainly focused on evaluating their cooperate strategies in line with the mean of sociality and how we define quality of life in order to direct the companies towards where society is inevitably heading. Such consulting work extends as far as to visualise design for their products which marks the company’s social responsibilities as well as to visualise their cooperate strategies and Fukasawa‘s work for consulting has led them to many successful results.