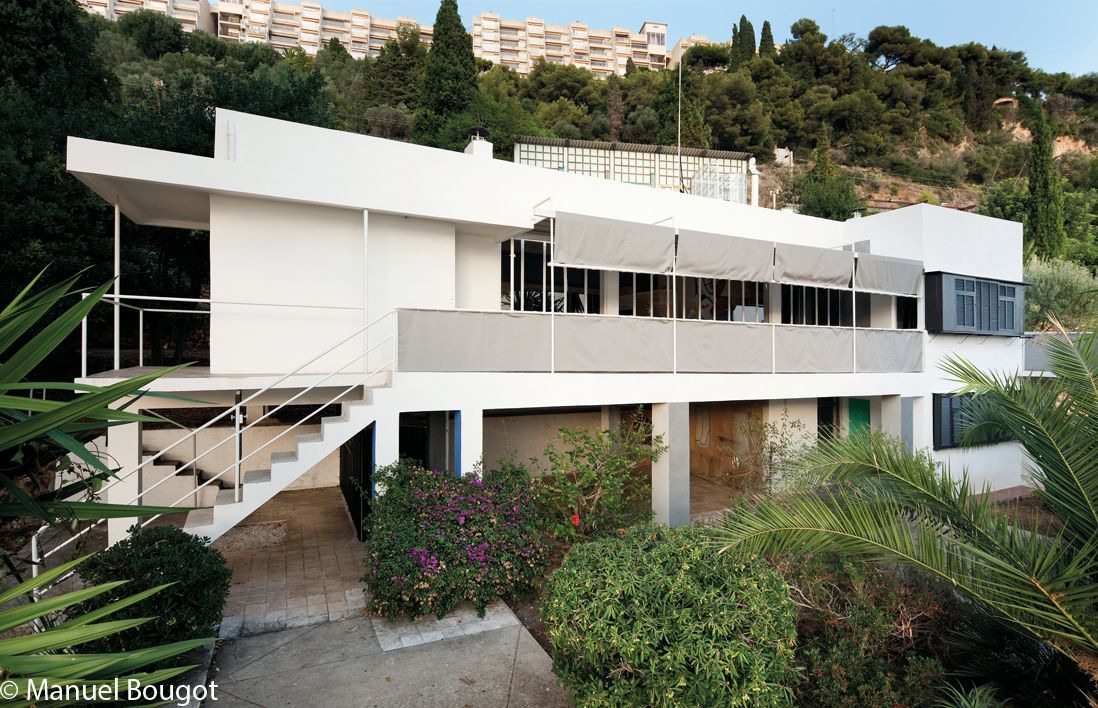 A true icon of modern architecture, Villa E-1027, Eileen Gray’s first architectural creation, is a testament to her careful thought in the design of every detail. It is a manifesto for the architecture itself, as well as for the fixed and mobile furniture, lighting and decorations that are inseparable from it. For three years, Eileen Gray designed the furniture and, in collaboration with her partner Jean Badovici, the plans for the project.

It was in Roquebrune-Cap-Martin, in France, that the Irishwoman Eileen Gray began building a villa in 1926, intended for her companion, the architect and art critic Jean Badovici. “E for Eileen, 10 of Jean’s J, 2 of Badovici’s B, 7 of Gray’s G”, the name of the villa interweaves their initials. However, the lovers did not live there together for long, separating in 1932. Jean Badovici remained the owner of the Villa until his death in 1956, receiving Eileen Gray many times as a guest and collaborator.

In the Villa, which was classified as a historical monument in 2000, Eileen Gray, designer, took her first steps as an architect. Encouraged by Jean Badovici, she spent three years drawing up the plans, furniture and construction. The result? A new architectural aesthetic, a manifesto for a model of living. The exterior is designed like a small “liner” on stilts. Magnifying the free plan, one of the five points of modern architecture stated by Le Corbusier, the view is breathtaking everywhere. With its flat roof, white and blue chromatic variations, tarpaulin blinds and reinforced concrete structure, Eileen Gray reinvents the seaside resort while preserving the intimacy of the place. To reach the house, you have to take the coastal path. The garden continues downhill to the sea.

On an L-shaped plan of 120 m2, Eileen Gray, forerunner of the plans of modern architecture, established autonomous rooms which all have access to a small terrace. The living room is also versatile: it can be easily transformed thanks to the furniture. The kitchen has movable partitions. For Eileen Gray: “Everyone, even in a small house, must be able to remain free and independent. They must have the impression of being alone.

As for the furniture, she designed it to be integrated, so that order reigns and each piece of furniture finds its place. In creating these pieces, she gave birth to some of her best-known designs. The Villa’s own press release states: “Some of the furniture and rugs are creations for sale in her Parisian gallery Jean Désert. These include the Transat armchair, inspired by those on ocean liners, the Bibendum armchair, a black leather bench with a chromed steel tube frame, the flying tables, the “Marine d’abord” carpet in the guest room and the clever circular chromed bedside table, called Table E-1027, which is height-adjustable with a metal chain.”

Although his paintings are less well known, Le Corbusier considered himself above all a painter. During two stays in Villa E-1027 – he was a close friend of Jean Badovici – he painted seven murals. Eileen Gray did not particularly like them because she thought they “violated” her architecture, and they were damaged by the war. But in 1949, Le Corbusier himself restored them. These murals contributed greatly to the preservation of the Villa, as their author had built his cottage a few metres away.