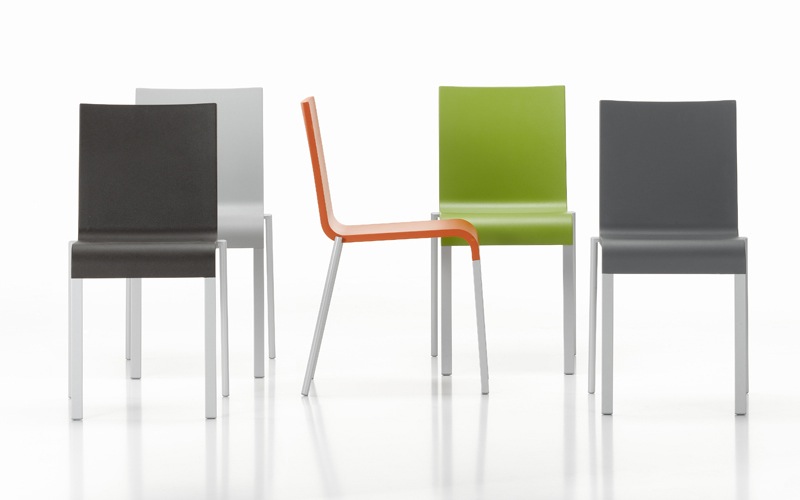 Maarten Van Severen has become known in the design world as “the big hero of the Belgian furniture industry”. His designs are produced and followed by major design manufacturers such as Edra, Vitra, Alessi and Pastoe. Van Severen’s designs are minimalist in their purity, yet have a powerful aura and are very easy to sit on and use. The furniture and interiors designed and produced by Maarten Van Severen look so self-evident and finished that it is sometimes difficult to believe that someone has spent years working on them.

“I work on the border of the usable furniture and the unusable object”.

Maarten Van Severen is he son of abstract painter Dan Van Severen and the father of Hannes Van Severen (Muller Van Severen). He studied architecture at the Royal Academy of Fine Arts in Ghent. After three years in school, he began to design furniture in 1986 then the following year established his own studio. Van Severen devoted himself to perfecting the proportion, detail, and fabrication of basic furniture forms. He worked with materials that he loved including aluminium, plywood, steel, Bakelite, and leather to create simplified designs.

Van Severen enjoyed a successful career across a spectrum of industries and collaborations. His furniture designs were first exhibited in 1988 and continued to be shown around the world. In the latter half of the 1990s, he held teaching positions at institutions including the University College West Flanders in Kortrijk, the Academy of Fine Arts in Maastricht, and the Delft University of Technology among others. He also collaborated with fellow architect Rem Koolhaas on several residential projects in France as well as the new Seattle Public Library and Casa da Musica, Portugal.
Beginning in 1996 he produced designs with the furniture company Vitra until his death in 2005.  Van Severen also worked closely with the companies Kartell, Edra, Alessi, and Pastoe over the course of his career.

“A design is only finished once it surprises me. Then I’m convinced that it will work”.

His work is included in the collections of the Vitra Design Museum in Denmark, the Museum of Modern Art, New York, the Ghent City Archive, the Flemish Architectural Archives, the Design Museum in Lisbon, Portugal, and the Department of Architecture & Urban Planning in the University of Ghent. He was honoured with two retrospectives at the Design Museum in Ghent, Belgium. Maarten Van Severen’s life and accomplished career were cut short at just 48 years old.