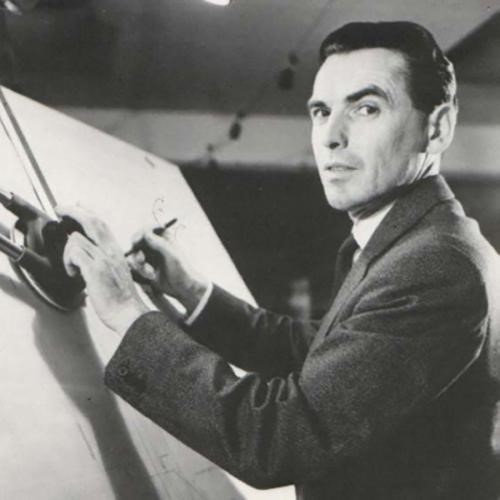 « Finding the fusion between technical perfection and the aesthetic form is

where the challenge lies for me. »

The Dutch designer, Cees Braakman, was born in 1917 in Utrecht. He began his design career at the very young age of 17 at the Pastoe furniture company, where his father was a designer, and became its head in 1948.

The social vision of design in the post-war Netherlands

After 1945, companies had to rebuild their facilities. They took advantage of this period to restructure their manufacturing processes and methods. Once Pastoe had managed to gather enough machinery, it was able to restart furniture production. As director and project manager from 1945 to 1978, Cees Braakman developed several furniture lines and added a new identity to the product catalog.

At the same time, the Netherlands was also in the midst of a reconstruction process, with a focus on modernist and social architecture on a large scale. Braakman was fully in line with this trend, designing furniture for small spaces and developing functional as well as aesthetic pieces of furniture.

An inspiration from the United States.

Braakman was sent to the United States in 1947 to study design methods and manufacturing processes. He fell in love with the work of the Eames couple and got inspired by them.

Back in Holland, he became the director of Pastoe and introduced their first modern designs with the technique of bending plywood (with, for example, the SB series from 1950) and new lines of modern furniture in wood, a material that he will continue to use in different forms (solid wood, plywood, oak, rosewood…).

In the 1950s, Cees Braakman’s furniture was supported by the “Stichting Goed Wonen” (Good Living Foundation), an association formed in 1946 by consumers, business people, and designers brought together to promote lines and products that were based on a shared aesthetic. This organization, which included designers like Friso Kramer, Kho Liang Ie, and Wim Rietveld, was the new embodiment of the prewar “Moral Modernism” (simple, honest, functional design) that emerged as Dutch designers became disenchanted with the aspirational ideals of De Stijl and other ideological movements. The Oak (1948) and Birch (1950) series of furniture were designed on this principle.

The association published a magazine in which Pastoe furniture is repeatedly highlighted for its modern, elegant and highly functional design qualities. It stated how the design of the furniture, like the inside of a drawer, was made from a single piece of molded plywood and allowed for easy cleaning. This pragmatic support helped the company regain its clientele and create a reputation as a trendsetter.

Beginning in 1955, Braakman devoted much of his work to the research and design of modular cabinets. His approach was that the user should be able to choose from a variety of different woods and modules to create a “custom system”.

His interest in this modular aspect of furniture led to him being awarded the 1957 Milan Triennial Prize for his “Made-to-measure” cabinets, offered at the show in a teak version.

In 1958, Braakman introduced the more formal, similarly clean-lined U+N cabinet series (this collection, in contrast, was not meant to be assembled by the end-user). Notably, Braakman’s Mobilo (Model PE03) cart (1953) is included in Amsterdam’s Stedelijk Museum.

Braakman has made its mark on Dutch design history with the geometric shapes and innovative technology of its creations. He passed away in 1995 and is now considered one of the greatest Dutch designers who designed some of the most beautiful pieces of post-war Dutch design.

Pastoe, the company he ran for 30 years, still continues its activities today. Marked by the modular and combinatory approach that the designer imposed nearly seventy years ago, it specialises in storage cabinets (sideboards, wall bookcases, base units) and still expresses a sober and classy design.