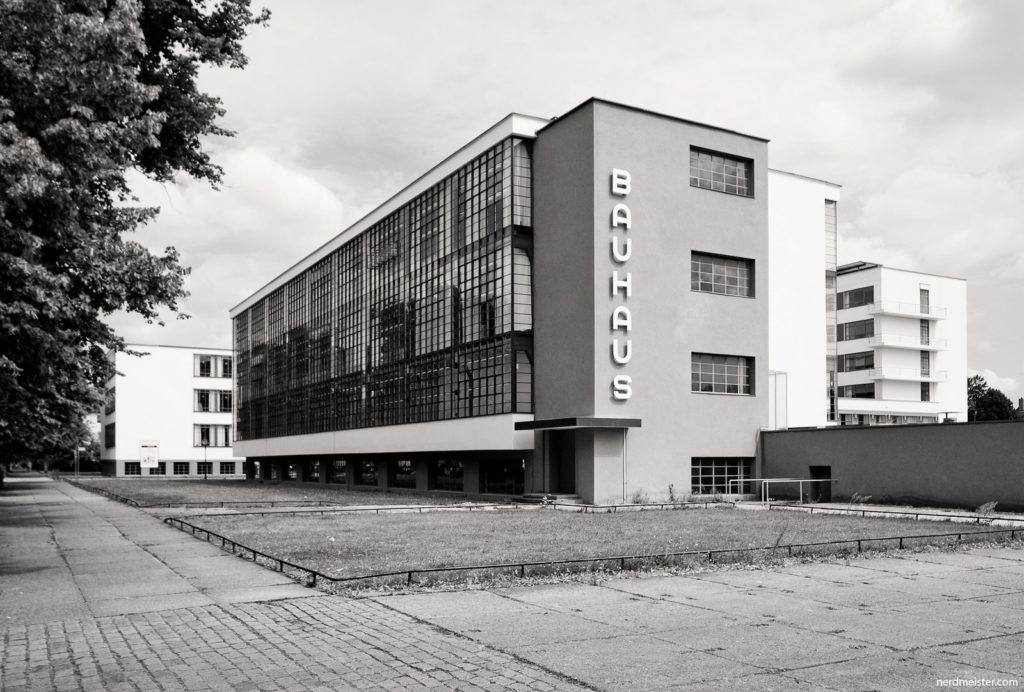 On April 1st, Walter Gropius completed the merger of the Academy of Fine Arts and the School of Decorative Arts in Weimar into one institution: the Bauhaus School was born. Its aim is to create “a collaboration between the artist, the industrialist and the technician who, organized while keeping the spirit of the time, could be able to replace the factors of the old individual work”. A program that introduces a revolution in mentalities. And that will result in passionate theoretical debates on the place of man in a mechanized environment and the creation of new forms adapted to the realities and spirit of modern times.

Michael Thonet’s bentwood furniture began a movement that continued with the reform movements of the late 19th century and took on concrete form with the foundation of the German Work Federation in 1907. Increasingly focused on the design and societal reform, this movement culminated in the Bauhaus program. Whether chairs or housing developments, Bauhaus called for a design revolution in countless areas of daily life. The high caliber artists Gropius appointed as masters at the Bauhaus Weimar included Gerhard Marcks, Lyonel Feininger, Johannes Itten, Paul Klee, Oskar Schlemmer, Wassily Kandinsky, and László Moholy-Nagy. The paradox of the early Bauhaus was that, although its manifesto proclaimed that the aim of all creative activity was building, the school did not offer classes in architecture until 1927.

The innovative furniture concepts and new Bauhaus furniture (Breuer’s Lattice Chair) were introduced to the public at the first Bauhaus exhibition in 1923 in the house which Georg Muche designed in Weimar, the Haus am Horn. From the mid-1920s onwards, Marcel Breuer transformed the Dessau furniture workshop into a laboratory. Inspired and supported by the neighboring Junkers Werke, Breuer not only experimented with the foundations of modular furniture and new industrial methods of production. One spectacular emblem of “liberated living” is Breuer’s Cantilever Chair. Hannes Meyer (1889-1954) furniture designs became daringly radical, both in their formal reduction and in their societal demands. Meyer’s notions of a new purist sense of esthetics were strikingly shown in the interior ensemble of his Co-op Room, which he presented in 1926 as a “radically” modern monk’s cell”.

Before the Nazis came to power, political pressure on Bauhaus had increased. The Nazi movement, from nearly the start, denounced the Bauhaus for its “degenerate art”, and the Nazi regime was determined to crack down on what it saw as the foreign, probably Jewish influences of “cosmopolitan modernism”. Despite Gropius’s protestations that as a war veteran and a patriot his work had no subversive political intent, the Berlin Bauhaus was pressured to close in April 1933. Emigrants did succeed, however, in spreading the concepts of the Bauhaus to other countries, including the “New Bauhaus” of Chicago: Mies decided to emigrate to the United States for the directorship of the School of Architecture at the Armour Institute (now Illinois Institute of Technology) in Chicago and to seek building commissions. Even though Bauhaus only lasted 14 years its impact on architecture and design is timeless and remembered.

As the centenary of the founding of Bauhaus, several events, festivals, and exhibitions are planned around the world in 2019.