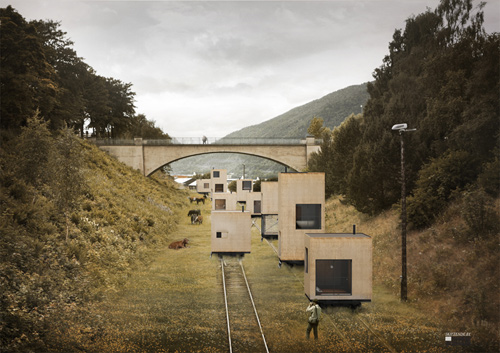 Swedish architecture office Jagnefalt Milton has been awarded the third prize in the Norwegian master plan competition for the city of Åndalsnes. Their proposal was to have buildings rolling through the city on rails.
The jury awarded the Swedish office for a proposal where existing and new rail roads would provide the base for new building that could be rolled back and forth depending on seasons and situations. Amongst other they proposed a rolling hotel, a rolling public bath and a rolling concert hall.

– We are really happy that the jury took our proposal serious,  its not only a good proposal which we are very proud of, it’s also fully doable, says Carl Jägnefält one of the two founders of Jägnefält Milton.