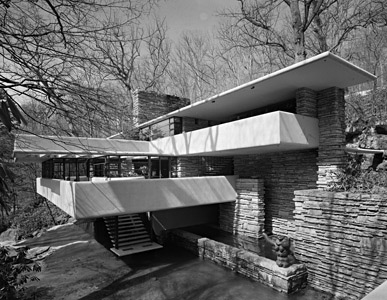 Yossi Milo Gallery is announcing an exhibition of photographs by Ezra Stoller (American, 1915-2004).
Fallingwater, Frank Lloyd Wright, Bear Run, PA Gelatin Silver
Print – 1971
A pioneer in the field of architectural photography, Ezra Stoller was commissioned by architects such as Frank Lloyd Wright, Paul Rudolph, Eero Saarinen, I.M. Pei, Marcel Breuer and Richard Meier, because of his unique ability to capture the building according to the architect’s vision and to lock it into the architectural canon.  His photographs convey a three-dimensional experience of architectural space through a two-dimensional medium, with careful attention to vantage point and lighting conditions, as well as to line, color, form and texture.