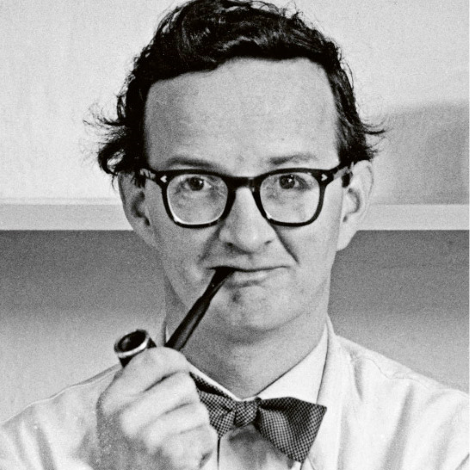 Frederick Stigurd (Stig) Lindberg was without any doubt one of the most prolific Swedish designers. He was active in a period in which segmentation and specialisation within the design profession was less developed. So his work can be found in a variety of materials, from melamine to textiles and enamelled steel, but also in a variety of forms, from ceramics to book illustrations and public fountains.

Untill a wood-cutting accident in his northern Swedish home, changed his mind the young Lindberg seriously considered a piano career, but after this incident he concentrated on drawing and studied with Helmer Osslund, a local artist. It was Helmer Osslund who first mentioned the existence of Gustavsberg, a porcelain manufacturer east of Stockholm, where Osslund had been a decor painter. His father’s military career made the family move to Jönköping where he started his education. In 1937 the 21 years old Lindberg travelled to Stockholm and got a job at Gustavsberg. He soon was chosen by Wilhelm Kåge to work in the design office were he would work until 1957. Gustavsberg, a three hundred years old factory at that time and had just (1937) been sold to KF (Kooperativa Förbundet) The strongly socialist inspired cooperative culture was both instrumental in changing the status of designers by allowing Wilhelm Kåge to introduce the “studio” system, as well as in encouraging the young Stig Lindberg in studying in Paris and in Denmark. Lindberg would later qualify his six month stay at the Académie Colarossi as the most important part of his artistic education. The fresh, un-complicated approach to decoration, figurines etc. that he learned in France made his work very popular in Sweden. It certainly was exceptional within a design world that was still very hesitant in the use of ornament and the design of whimsical animal and children figurines.

His most known designs in tableware are “Berså” “Spisa” and “Birka”. Both Berså and Birka became very popular and were the most common tableware in Swedish households. “Terma” became the standard for stoneware ovenproof utensils. The typical “studio” structure of Gustavsberg’s design department where designers combined there own artistic activity with design for industrial production allowed Stig Lindberg to produce hundreds of unique stoneware and earthenware (faience) pieces in a variety of techniques and glazes.

His friendship with Astrid Sampe, the talented manager of NK’s (Nordiska Kompagniet) textile design resulted in about 30 textile designs produced just after the war years. Several patterns both on porcelain and textile became very popular and Mc Donald’s Sweden went as far as using “Berså” recently on their paper cups. In 1949 he would become Gustavsberg’s artistic leader a function he would keep until a few years before his dead. In 1957 he interrupted the function to start teaching at Konstfackskolan where he became professor in 1970, but returned to Gustavsberg in 1972.
He also made himself a name as book illustrator by illustrating the somewhat surrealistic children stories of Lennart Hellsing: “Krakel Spektakel”, “Daniel Doppsko” and “Nyfiken I en strut” especially the first one is a long standing Swedish classic.
His designs in glass were produced by Malarås Glasbruk and Kosta in Småland and Holmegaard in Denmark. He sidestepped his most common fields to design a TV set for KF owned company.

In 1968 he received the Prins Eugen medal, gold medals at the Milan Triennales in 1951 and 1954 and a gold medal at the Cannes Ceramics exhibition in 1955.
Apart from his memorable career as an educator, Stig Lindberg was also an active participant in the design debate in Sweden and as a professional he did his part in defending the intellectual property rights of designers. Although clumsy, and notorious for braking things he was always a pleasure to be with. He had an exceptional sense of humour and of course…played the piano.