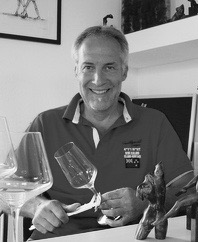 Walter Wenzl was born in Mallersdorf.
His artistic talent led him to a craftsman training as a glass engraver, where he finished his training as 2nd “Bundessieger” in the performance competition of the craft youth.
Then he started a design education also at the glass school in Zwiesel.
After completing his design training, Walter Wenzl was fortunate enough to get a job as head of the design department.
There he coined the appearance of this very successful company with 700 employees for several years. In his design studio in Regen, which he founded in 1985, glass fittings for fully automatic production, as well as high-quality mouth-blown collections were developed to production maturity.
Walter Wenzl also designed collections for MIKASA, which at the time was the largest export and import company for the “covered table” in the USA, and for the largest Japanese glass manufacturer SASAKI.

He developed bottles, drinking glasses and gifts for CHRISTIAN DIOR in Paris for several years.
Since 1987 he is a member of Industrial Designers Society of America.
While working as a glass designer, more than 5,000 articles from his pen have been launched in the markets worldwide. Walter Wenzl was one of the world’s most successful glass designers in the 1990s. Among other awards, he received the quality mark for exemplary product-form 86 ‘in 1986, on the occasion of the Frankfurt Autumn Fair for the series “Veronique”, inn crystal, Austria. Walter Wenzl was also honored by the “Haus Industrieform Essen” for high design quality in 1987, for the “Rio” series, Süssmuth, Germany 2015.

In 2015, he received the Three-Country Prize “Gateway to Art” for the sculpture “Pylon”.