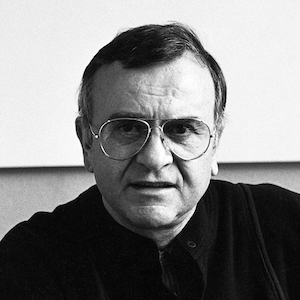 Roger Tallon is inextricable from the landscape of modern French life — his prolific designs expand across the country above and below ground as trains and subways, crossing borders from France to the UK on the Eurostar, existing in domestic and public spheres alike. Tallon’s boundless genius has birthed machines, appliances, quotidian objects, architecture, graphic design and fine art collaborations. He is credited with bringing American design to post-war Europe, after working with US companies, such as Frigidaire and General Motors and is responsible for delivering design to academia in France. Tallon’s work has touched French life, championing design that makes the world more livable.

Tallon was trained in engineering, rather than the decorative arts, a fact reflected in his designs which are thoughtful, as opposed to lavish. He was first exposed to American industry, an ongoing inspiration for his work, during his compulsory military service in West Germany. Pursuing this interest, Tallon began his prolific career while a consultant for American companies after the war. He became acquainted with Jacques Viénot, head of the firm Technès, excited by how closely their vision of design paralleled one another’s. The two related over their joint fascination with American industrial design, which had not yet become popular in France and, more deeply, their desire to adopt the virtues of this style.

Beyond Technès, Tallon worked with a variety of firms, founding his own, then ultimately establishing ASDA & Partners in 1983 with Pierre Paulin. In each of these companies, he produced abundantly, permeating the lives of the French population with works as diverse as cameras, typewriters, televisions – including the portable Téléavia P111 – furniture and games. His relationships with his contemporaries, including many of the Nouveaux réalistes, lead to collaborations such as a 1966 project with César in the Orly Airport. The pair created a punchy series of chairs, the surfaces adorned with life sized representations of celebrities and figures of the moment, including Brigitte Bardot, General De Gaulle, Dalì and Picasso.  Furthermore, Tallon extended his community, pushing the future of design through his pioneering role in academia. He taught the earliest design course in France in 1957 at L’École des Arts Appliqués and established the first design department in the country at the highly prestigious L’École Nationale Supérieure des Arts Décoratifs in 1963.

In 1968, Roger Tallon undertook the first of his iconic transit designs, the trains for the Mexico City underground system. His grand success led to future projects of a similar nature in France, including the Corail Train, 1974, the TGV Atlantic, 1989, the Eurostar, 1994 and the TGV Duplex, 1995, which is widely regarded as his masterpiece. Additionally, Tallon designed the Montmartre funicular, 1991, whose cars feature large glass windows that allow passengers to observe the city as they ascend, Paris’s driverless Line 14 metro cars, and the Parisian RER route map. The brilliance behind each of these projects is Tallon’s perception of venues as unassuming as train cars to be areas in which commuters are required to live portions of their lives. His designs respond to this understanding with meticulously considered functionality that promotes a comfortable environment for the masses.

Roger Tallon’s legacy is uniquely grand, his expansive creativity matched by his enormous oeuvre. Tallon was the same man who had designed the TGV and the Train Corail as well as washing machines, refrigerators, toothbrushes, and tools. His work proliferated and redefined daily life through the breadth of its reach, responding to Tallon’s desire to improve lives through design meant to endure the pressure of a changing world. His works continue to receive recognition, found in major institutions including the Museum of Modern Art, New York, and Musée des Arts Décoratifs, Paris, with retrospectives in museums such as the Centre Georges Pompidou, Paris. He was a recipient of the Grand Prix Nationale de la Création Industrielle, 1985.