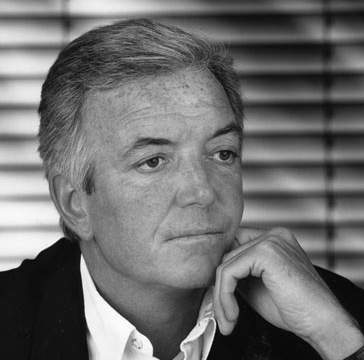 Born in London in 1943, the British furniture designer Rodney Kinsman attended the Central School of Art there until 1965.

In 1966 Rodney Kinsman joined Jurek Olejnik and Bryan Morrison in founding OMK Design to make the furniture they designed. Rodney Kinsman’s “F Range” (1966) chair was one of the first pieces of furniture produced by OMK. The “F Range”, a block of foam plastic covered in red vinyl, is typical of 1960s furniture and is generally regarded as Rodney Kinsman’s most stylish piece.

Later Rodney Kinsman concentrated on designing furniture that would remain popular because of its underlying technical conception. For the Italian firm Bieffeplast, Rodney Kinsman designed the “Omstak” chair in 1971, a piece that was enormously successful. The seat and back of the “Omstak” are made of molded sheet steel coated with epoxy resin; the striking holes in the construction actually enhance its stability.

In 1981 Rodney Kinsman designed the “Graffiti” shelving system, also for Bieffeplast, with a single steel support for each unit. This shelving does not need to be fastened to the wall or the floor but is simply leaned against the wall. Rubber base material prevents slippage. During the 1980s, Rodney Kinsman designed numerous other functional pieces of furniture informed by a rationalist aesthetic. They include the “Vienna” chair (1984) and the “Tokyo” chair range (1985). Together with Peter Glynn-Smith, Rodney Kinsman 1981 designed the “Transit” seating system, originally intended for Gatwick Airport. Along with the “Sevilla” aluminium row seating (1991), designed for the Seville Expo ’92, and the “Trax” chair system, “Transit” has been one of the most successful seat furniture systems produced by OMK and they are now in use at more than a hundred airports and numerous other public buildings worldwide.

In 1983 Rodney Kinsman was made a Fellow of the Society of Industrial Artists and Designers and, in 1988, an Honorary Fellow des Royal College of Art.