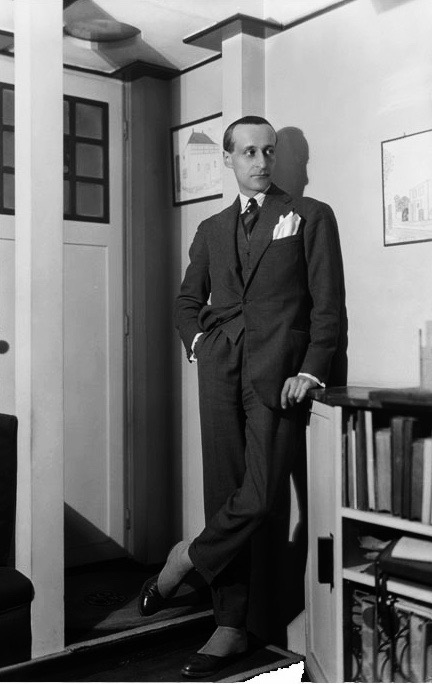 Robert Mallet-Stevens was born March 24, 1886 and died February 8, 1945. He was an influential French architect and designer.

Mallet-Stevens was born in Paris in a house called Maison-Laffitte (designed by François Mansart in the 17th century). His father and his grandfather were art collectors in Paris and Brussels. He received his formal training at the École Spéciale d’Architecture in Paris, during which he wrote Guerande about relationships between the different forms of art.

In 1924 Mallet-Stevens published a magazine called La Gazette Des 7 Arts and at the same time with the help of Ricciotto Canudo founded the Club des amis du 7ème art. A Paris street in the 16th arrondissement, Rue Mallet-Stevens, was built by him in the 1920s and has on it six houses designed by him.

A portfolio of 32 of Mallet-Stevens’ designs was published under the title Une Cite Moderne in 1922. In addition to designing shops, factories, a fire station in Paris, apartment buildings, private homes, and interiors, he was one of the first architects to show an interest in cinema. He designed film sets and his design for Marcel L’Herbier’s silent film L’Inhumaine (1924) is considered a masterpiece.

In 1929, surrealist photographer and filmmaker Man Ray made a film inspired by his design for the buildings named “Villa Noailles” entitled The Mysteries of the Château de Dé.

During his career he assembled a team of artisans and craftspeople who worked with him: interior designers, sculptors, master glaziers, lighting specialists, and ironsmiths. An example of his collaborative nature is provided by the Union des Artistes Moderne (UAM), formed in 1929 by a group of 25 dissidents of the Société des Artistes-Décorateurs (SAD), and presided over by Robert.