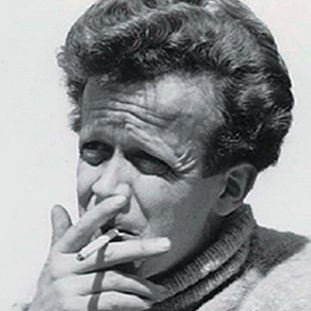 Not unlike many other prominent Danish designers, Kristian Vedel first completed an apprenticeship as cabinetmaker. The early second world war years were rather chaotic but in spite of that he became a student under professor Kaare Klint at the Furniture department of the Royal Academy of Fine Arts in Copenhagen. A year after leaving the Royal Academy he graduated from the furniture department of the School for Arts and Crafts in Copenhagen. A few years later in 1953, he started teaching in the same school, but left after three years. While serving as chairman for the Danish Furniture Designers he laid the groundwork for the founding of IDD. Industrial Designers of Denmark, a professional organisation of which he also became the first chairman. He stayed in that position until he left Denmark and his Humblebaek studio for Nairobi, Kenya. For Kristian Vedel this was not just another challenge but a duty motivated by a strong believe in social values and in the designer’s role to contribute where it is needed mostly. At the University of Nairobi he founded the department of Industrial Design and became it’s first director. Kristian Vedel and his second wife, Ane Pedersen came back to Denmark in the early seventies and established a studio on Thyholm in North Western Jutland. In spite of the successful production he left behind when leaving Denmark, with landmark products like the Children’s chair, the Modus line of superb modular furniture and the the stackable melamine dishes for Torben Orskov, Kristian Vedel never returned to practice design in the Danish design tradition he had contributed so generously to. At Thyholm he concentrated instead on breeding the beautifull black faced Shropshire sheep that produce such superior wool. With his usual commitment to do things right he researched the use of their wool, hide and the meat of this slow growing English breed.

An often quoted statement of Kristian Vedel is:
“The starting point for an industrial artist’s work must always be that he, from his own point of view, and as objectively as possible, takes a position with regard to what he feels society and his fellow men need; he must personally take a stand on the existing possibilities and responsibilities.”

This attitude and his great talent makes him without any doubt, and in spite of a modest number of products, one of the most important Danish designers. For his work he was awarded the first prize by the Copenhagen Cabinetmakers Guild (1947), Louisiana Museum Prize (1957), silver medal at La Triennale di Milano for children’s furniture (1957), a gold medal at La Triennale di Milano for his line of stackable melamine dishes, the Design Award at Interplast in London (1961) and for his general contribution the prestigious Lunning Prize in 1962.