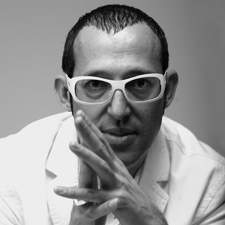 Karim Rashid is an industrial designer.
He received a Bachelor of Industrial Design in 1982 from Carleton University in Ottawa, Canada. He pursued graduate design studies in Naples, Italy, with Ettore Sottsass and others, then moved to Milan for one year at the Rodolfo Bonetto Studio. Rashid went on to work with KAN Industrial Designers in Canada. There he co-founded and designed the Babel Fashion Collection and North between 1985-91. In 1992 Rashid opened a private design studio in New York City.

Karim’s work is featured in 20 permanent collections and he exhibits art in galleries worldwide including the MoMA, Centre Pompidou, and SFMOMA. He holds honorary doctorates from the Ontario College of Art & Design, Pratt Institute and Corcoran College of Art & Design. Karim is a frequent guest lecturer at universities and conferences speaking about the importance of design in everyday life.