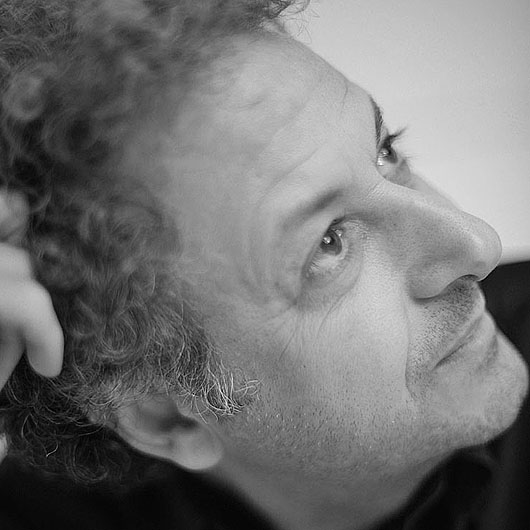 Giovanni Levanti was born in Palermo where he graduated in Architecture. As he was interested in the artistic avant-garde movements and radical design he moved to Milan. Here he attended Domus Academy and started his collaboration with Andrea Branzi.

In 1991 he opened his own studio. His work was immediately recognised and appreciated: he took part  in the exhibition “12 New Memphis” and renowned design brands such as Cassina, Edra e Campeggi  began including his projects in their own catalogues.

He has always been exploring – through a method based on the constant feedback between intuition and discipline – different possibilities and new typologies for renewing the domestic comfort. His work is placed between vision and reality, utopic openness and production.
He has worked, among others, for Alessi-Twergi, Azzurra Ceramica, Diamantini&Domeniconi, Foscarini, Pallucco, Salviati, Serafino Zani and for Japanese companies such as In the Room, Marutomi and Nagano.

Throughout the years his works have been selected for prestigious international exhibitions.

In 2014, a solo exhibition “Il Candore Umano”  was held at Palazzo Agliardi within DimoreDesign  in Bergamo.
In 2010, a broad retrospective of his work was curated by Beppe Finessi,  in the grounds of the Careof and Viafarini Galleries, at the Fabbrica del Vapore in Milan.
In 2007, his first solo exhibition  was held at Literary Café of Teatro Massimo in Palermo.

Along with his professional activity he has also been teaching: as visiting professor at Scuola di Specializzazione in Industrial Design of the Faculty of Architecture in Palermo; master and project leader at Domus Academy in Milan; professor at  NABA (Nuova Accademia delle Belle Arti)  in Milan.
He teaches Industrial Design at ISIA (Istituto Superiore delle Industrie Artistiche)  in Faenza and at the Academy of Fine Arts in Catania.

He lives and works in Milan.