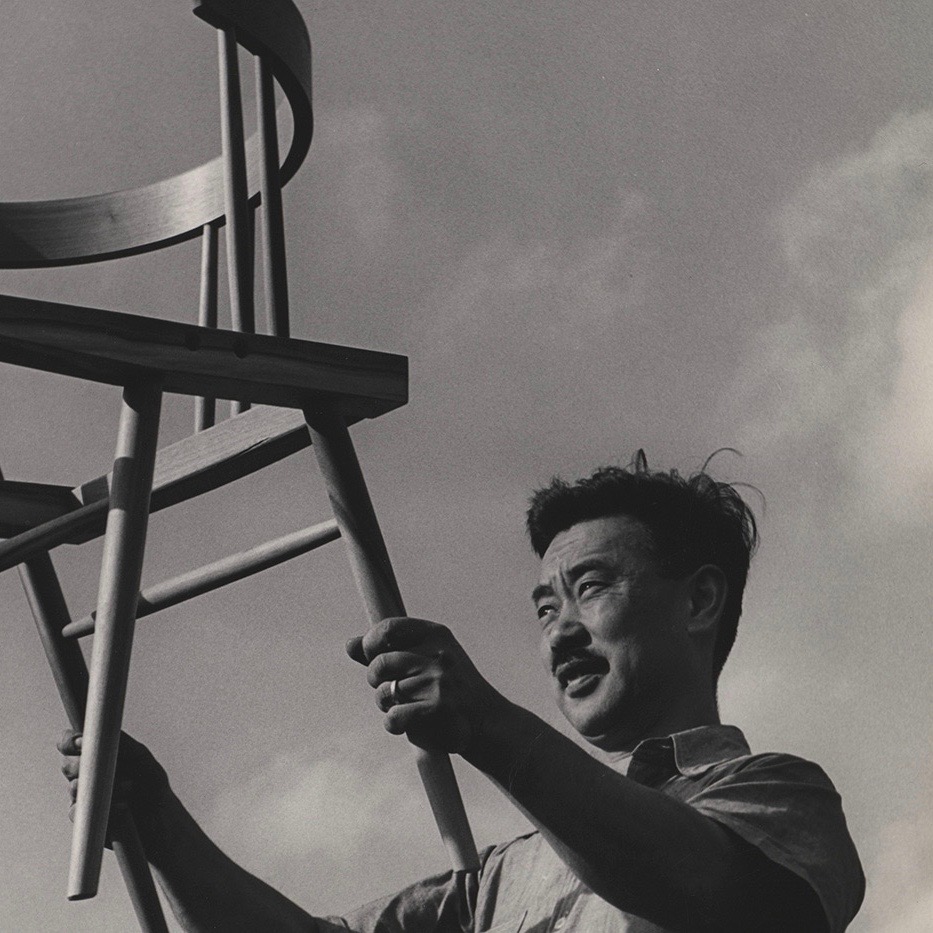 George Nakashima was born in Spokane, Washington in 1905 to Japanese immigrants. He always deeply loved trees. He said ‘I’m essentially a druid. I believe that there are ghosts in trees, and in a very deep sense the tree is more God-like than man… His passion for trees would become a guiding force in his approach to his craft.

However, George did not set out to be a furniture craftsman. He studied Forestry and Architecture at the University of Washington, and while he was there he won a scholarship that enabled him to study at L’École Americaine des Beau-Arts at Fontainebleau, in Paris. In 1928 he was awarded the Prix Fontainebleau, and he went on to earn his Masters in Architecture from the Massachusetts Institute for Technology (MIT).

Before the Great Depression, George started out working as an architectural designer and mural painter for the Long Island State Park Commission. However, the Great Depression took its toll on America, and George lost his job, like so many others. He traveled for a while, spending time in Paris and Africa before accepting a job with architect Antonin Raymond in Tokyo in 1933. Raymond was a well-known architect, having collaborated with Frank Lloyd Wright on the design of the Imperial Hotel. Raymond’s style was a marriage of traditional Japanese aesthetics with modern methods and building materials. George appreciated this aesthetic, and it later influenced his furniture design.

George traveled quite a bit for his work with Raymond, including spending time in India to build a dormitory in an ashram. That building was styled after Modernist architect Le Corbusier’s International Style, which is characterized by its use of rectangular forms with a lack of any embellishment or decoration, leaving the surfaces flat and smooth.

Unfortunately, with World War II imminent, Raymond had to shut down his offices and George returned to the United States. He didn’t return to the state’s empty-handed, however. While in Tokyo George met the woman who would become his wife, Marion. By coincidence, she had also grown up in Seattle, and was just in Japan teaching English. They returned to the states and settled in Seattle, marrying in 1941.

On arriving in Seattle, the couple opened a furniture workshop. However, it turned out George was not able to escape the problems associated with war. In 1942, President Roosevelt signed Executive Order 9066. This order established internment camps for all people of Japanese ancestry, and George was forced to move with his family to a camp in Minidoka, Idaho in 1942.

The time in the internment camp would prove to be life altering in many ways for George Nakashima and his family. When he came back to America, George had opened his furniture workshop because he decided to ‘get into something that I could handle from beginning to end.’ He saw furniture as that sort of project. In Minidoka, he met a man named Gentaro Hikogawa. A skilled craftsman, Gentaro taught George to use traditional Japanese tools and joinery techniques. One of these techniques would become part of George’s signature style: butterfly joints. This method of joining wood involves inlaying a piece of wood in the shape of a butterfly, or essentially two triangles connected at their points, to connect two pieces of wood.