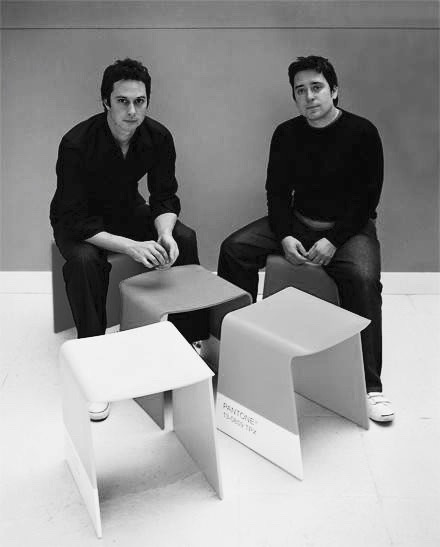 Edward Barber and Jay Osgerby founded their eponymous studio in 1996 after graduating with Master’s degrees in Architecture from The Royal College of Art in London.
Much of Barber and Osgerby’s early work involved the folding and shaping of sheet material, influenced by the white card that they had used frequently in architectural model making. Plywood and perspex were used in the development of the Pilot Table, 1999, and Stencil Screen, 2000.

In 2004 the pair were awarded the Jerwood Applied Arts Prize. This led to a commission to design new pieces for the De La Warr Pavilion in Bexhill On Sea. Known for their use of colour, with the limited edition Iris tables, Barber and Osgerby developed a new direction, using colour as the starting point for the work.
2010 saw the creation of an experimental installation for Sony at the Salone Internazionale del Mobile in Milan. Through a series of conceptual objects that exploited Sony’s new sound technologies, a perspective was presented for how electronics could be better integrated within contemporary home interiors. Another investigation, this time into school furniture and how dynamic movement in a chair can aid concentration, resulted in the forward-tilting Tip Ton chair launched with Vitra in 2011.

Both Honorary Doctors of Arts, Barber and Osgerby have lectured internationally and hosted workshops at Ecal, Switzerland, and the Vitra Design Museum. Their work is held in permanent collections around the world including the V&A Museum, London; New York’s Metropolitan Museum of Art; London’s Design Museum; and the Art Institute of Chicago. Alongside their eponymous studio, in 2001 Barber and Osgerby founded Universal Design Studio, now recognised as one of the world’s most innovative creative design consultancies working in architecture, interiors and exhibition design. In 2012, the pair followed this with the launch of MAP, a strategy-based industrial design studio that draws on the creative and commercial skills of BarberOsgerby to provide design intuition, creative direction and research to ambitious clients.